and our Long Lake Neighbors

Following after the Wayzata Chamber of Commerce’s Appreciation Picnic, the Wayzata Fire and Police Departments hold their annual softball game known as the Old National Bank Cup. The skill level is quite diverse and the outcome provides bragging rights for the following 364 days. 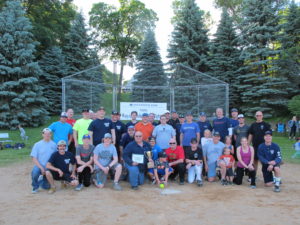 Thanks to a generous donation by the Renewal by Anderson Company, the Wayzata Police Department received two new electric police bicycles through the Wayzata Crime Prevention Coalition. The bikes were donated by Renewal by Anderson to honor the memory of fallen Wayzata Officer Bill Mathews. The company was working on a project with Bill’s wife Shawn when they learned of her story. They reached out to the police department asking what they could do to help the department and to honor Bill.

The bikes were presented to the department through the Wayzata Crime Prevention Coalition at a ceremony on June 13th at Klapprich Park prior to the annual Wayzata Police vs. Wayzata Fire charity softball game. Representatives from Renewal by Anderson were on hand along with members of the police department. Shawn and Wyatt Mathews were also in attendance. The bikes are valued at $5,800. They will serve as excellent tools for patrols and community outreach efforts. Many thanks to Renewal by Anderson for their generosity and for remembering Bill. 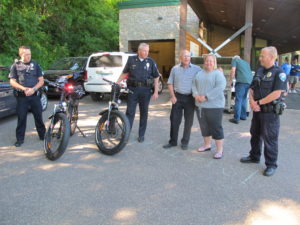